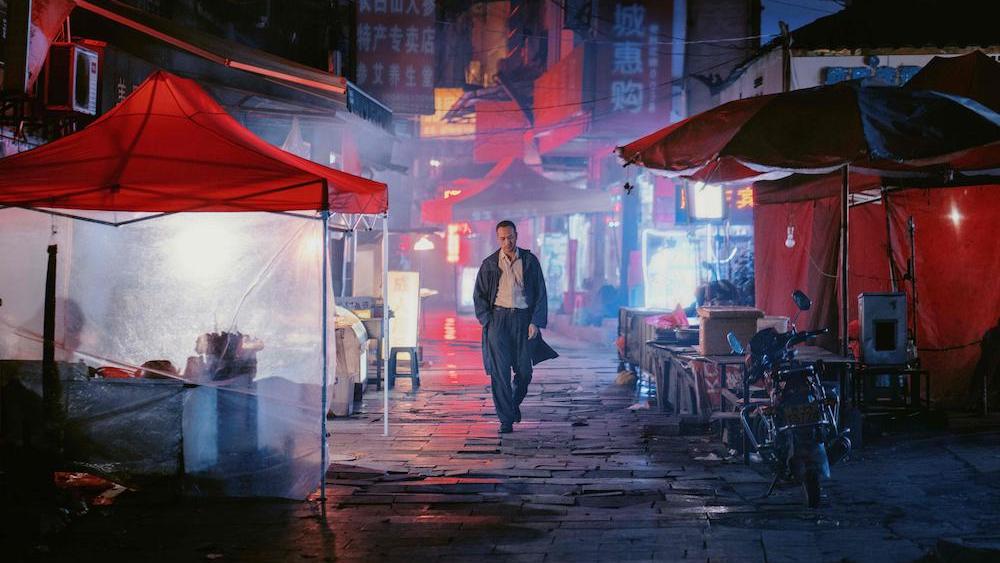 A week ago, I saw Bi Gan’s movie The End of Eternity (《地球最后的夜晚》)– called In English Long Day’s Journey into the Night — on a Cathay Pacific flight. I came away thinking that this must be one of the great movies of all times. The next day I discovered that it was also playing at a neighboring movie house and so went to see it again. I couldn’t sleep after that as the images, words, and sounds of the movie were hauntingly coming back to me again and again in the middle of the night. Dark, mysterious, and melancholy, Bi Gan’s work is, in fact, a piece of the most sublime Chinese poetry and utterly captivating as this poetry can be.

Its story may be simple and even banal: a man looking for a woman he had known many years before. But it is developed captivatingly in a series of magical scenes that move back and forth in time and place in an unexplained fashion. Its logic is that of a dream, of free poetic associations in which images, words, and sounds repeat themselves in a disorienting fashion. The effect is heightened by the way the movie is constructed in two separate halves, the first shot in standard format, the second in 3D. While the first half is replete with images of water, the second is preoccupied with images of stone. The movie begins with the protagonist washing his face under a faucet; then he stands in a basement where water is pouring through the ceiling and accumulating on the floor. Later he arises suddenly out of a deep pond apparently in the same place, but when his companion steps into it that same water it appears to be only ankle-deep. In the second half, the hero finds himself suddenly in an abandoned mine; he drifts on a small gondola into a town in which everything is made of stone; he follows a torch-bearing woman up mysterious stone staircase but then, returning to the market-place, walks up once more on those same rocky stairs.

While the movie’s present-day story is set in the year 2000, it shows us nothing of the world of modern China. There are no high rises here, no motorways, no shopping malls, no huge teeming masses, and certainly no signs of China’s economic and military might. We are in a forgotten, claustrophobic corner of China. The signs of an outside world are few and far between. In the first few, passing shots we see some construction machinery and an old metal girder being cut down; we are told of the hero’s friend, a young small-scale crook, whose body is one day found in a mineshaft; there is the image of a cobra suddenly striking the wall of its cage; a disturbing upside-down scene of the hero aiming his gun at another man sitting in front of him in a movie theater; a house burned down by a jealous woman. But these moments of violence are never allowed to dominate the movie; they are embedded in it, rather, like sudden, fearful intrusions into a more languorous dream.

The movie begins with the hero’s return to his hometown after his father’s death. The father, he hears, has spent his final days looking at a dead clock on the wall. When our protagonist opens the clock he finds in its back a photograph of the woman he has once known. At the end of the movie our hero gives a watch to a woman he has just met and who may or may not be the one he has been looking for all the time. She notes that the watch is not working and tells him that a watch is a symbol of eternity. He, in turn, draws her attention to a pair of sparklers she has lit on her make-up table and tells her that they are symbols of the transitory. We are left to contemplate their kiss with these words in mind.