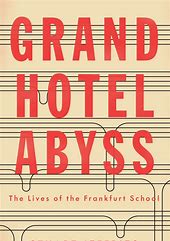 According to our new alt-right friends, the Frankfurt and cultural Marxist philosophy“now controls Western intellectualism, politics and culture. It was by design; it was created by an internationalist intelligentsia to eradicate Western values, social systems, and European racial groups in a pre-emptive attempt to spark global communist revolution.” (Click here) This discovery is, actually, a bit late. The Lyndon LaRouche folks have been saying much the same for the last quarter of a century. Walter Benjamin, the seemingly hapless Frankfurt intellectual – they have been saying – has in reality been the ultimate puppet master of modern civilization, responsible for everything from a bad turn in literary theory to bad TV. “Perhaps the most important, if least-known, of the Frankfurt School’s successes was the shaping of the electronic media of radio and television into the powerful instruments of social control which they represent today. This grew out of the work originally done by … Theodor Adorno and Walter Benjamin.” (Click here) What else would you expect from those nefarious German-Jewish intellectuals?

Stuart Jeffries’ Grand Hotel Abyss is an indispensable antidote to such fevered excesses. It traces the lives of the members of the Frankfurt School from 1900 to the new millennium and of the school itself from its uncertain beginnings in Frankfurt in the 1920’s, through its exile in America, to its eventual return to Germany. Jeffries’ story reveals how marginalized the Frankfurt School people were right from the moment of the foundation of their institute, how they were forced to relocate the institute first to Geneva and then to New York to save it from Hitler’s powerful grip. In the US, the Frankfurt scholars found it difficult to get adjusted and while some of them stayed after the war, the two leading figures, Horkheimer and Adorno, returned to Frankfurt only to be caught up in the cultural and political turmoil of the late 1960’s. At no point did they succeed in establishing a hegemony over intellectual, cultural, and academic affairs or, for that matter, over the political debate. Benjamin committed suicide while trying to escape the Nazis; Adorno died of a heart attack after being confronted by rebellious left-wing students.

How far does the academic influence of the Frankfurt School in fact reach? Certainly not very far into Anglo-American philosophy departments which are still predominantly positivistic and analytic in outlook. If we are to look for foreign influences in those places we must turn to the logicians, linguistic philosophers, and philosophers of science of the Vienna Circle, not to the Frankfurt School. Certainly also not in political science departments which are mostly dedicated to “government studies” and have typically only a few “theorists” in their ranks. Certainly not in Sociology department. The sociologist Robert Dunn in a recent book complains bitterly about “the positivist tendencies and narrow scientific preoccupations … which have prevailed within the disciplinary mainstream at the expense of engagement with the social and human problems engendered by modern capitalist society.” (Toward a Pragmatist Sociology, Temple University Press, Philadelphia 2018, p. vii) And it’s not a turn to the Frankfurt School he calls for but to the all-American pragmatist John Dewey. We can go through the roster of humanities and social science departments across America and may find a smattering of Frankfurt School influence, but the mainstream remains firmly committed to positivistic, hermeneutic, historical, and traditional scholarly modes of thinking.

Jeffries tells his story in a lively fashion. I certainly kept on reading — though with reservations. The problem is that like any number of books these days Jeffries’ focuses on biography and human psychology and treats the accomplishments of the biographed figures only as incidental. Jeffries spends much of the first chapter to establish that the founders of the Frankfurt School were motivated by Oedipal feelings against their fathers. He calls Walter Benjamin the School’s greatest thinker but never really explains to us what makes him so great. The ideas that made the Frankfurt School famous are never elaborated. When it comes to basic Frankfurt School concepts like those of “dialectic” and “reification” Jeffries falls back on sketchy and wholly unsatisfactory characterizations. In the end, I was ready to reach for a classic like Martin Jay’s book The Dialectical Imagination to help me with understanding what made the Frankfurt School so interesting.