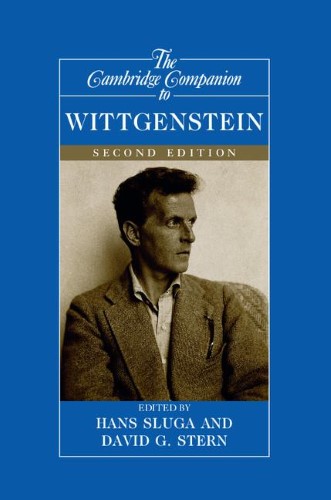 Ludwig Wittgenstein was one of the leading philosophical minds of the twentieth century and his thought remains of live interest. But he is not easy to read. Not  that he writes long, complex sentences with obscure philosophical terminology. On the contrary. His prose is simple, straightforward, and exemplary. But his texts are so condensed that it often becomes difficult to follow the course of his thinking.

Twenty years ago, David Stern and I published the Cambridge Companion to Wittgenstein which was intended to help readers along. The volume became eventually one of the bestsellers in Cambridge University’s companions to philosophers series. We have now brought out a second edition of this work, Some of the contributions to the first edition have stood the time and are reprinted in this new one. But we have also added some great new pieces and included a completely updated bibliography. The volume contains, among others things, now a lucid essay by Kevin Cahill on Wittgenstein’s reflections on ethics and a brilliant piece on Wittgenstein’s concept of seeing an aspect by Juliet Floyd. David Stern has contributed a new essay on Wittgenstein’s changing thoughts in the 1930’s and Joachim Schulte has tackled the topic of “body and soul.”

Apart from a new introductory essay, I have written a piece on time and history in Wittgenstein for this second edition. Wittgenstein’s thoughts on these topics have not yet been fully explored. My goal in this essay is to find a new way of looking at Wittgenstein’s writings. Another aspect of that same project is a lecture on Wittgenstein’s conception of the world in the Tractatus. The power point file for this lecture is available on this website. Click here