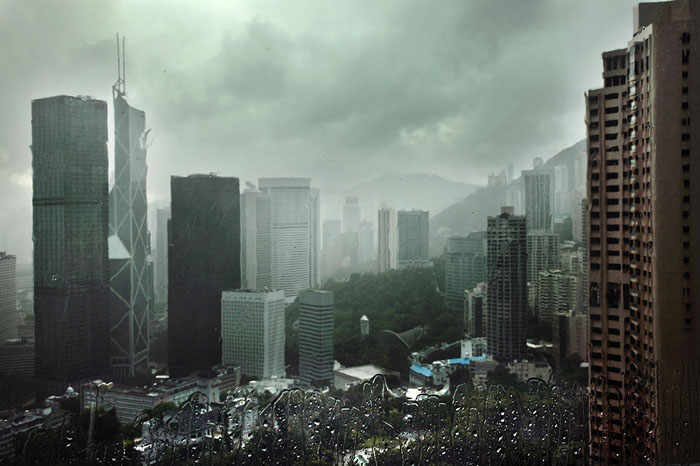 It was drizzling yesterday evening as my plane landed in Hong Kong. During the night, a drumbeat of rain kept beating my hotel room window – not an unpleasant sound when you are from water-starved California. This early morning, the weather outside is already hot and sticky as I am struggling to raise my room temperature above fridge-level.

But other things are on my mind. I am planning to meet Joshua Wong this morning, the 25 year-old prodemocracy leader who has already been nominated for the Nobel Peace Prize. That may be premature but Wong is certainly an impressively dedicated figure. He became engaged in politics at the age of 15. has mobilized mass demonstrations for political change, has founded a party, and he has been to prison for his activism. And he seems by no means ready to throw in the towel. I hope to get some answers from him about the current status and future of Hong Kong.

What interests me is that the city sits at the point of intersection between China and the Western world and the way it goes is likely to tell us something about the course of global politics. A British creation, Hong Kong was ruled from London for more than a century. No self-government here, no democracy, but plenty of free market capitalism. When Britain finally handed Hong Kong to China under the formula of “One country, two systems” a tentative and partial democracy came into existence. Hong Kong democrats hoped that eventually a more fully formed democracy would emerge and they also hoped that it might serve eventually as an example to China, making it also more democratic in due course. Neither of these two things has happened. And in the last few years China has more openly set limits to Hong Kong’s political freedom. Meanwhile, the city’s style of unconstrained capitalism keeps on flourishing.

The city, I fear, may prove to be a lab case for how the increasingly shaky relations between China and the US will play out in coming decades. Sitting between these two powers, Hong Kong is forced to adapt itself to the forces that pull either way, The result is a peculiar hybrid system. Unlike China, Hong Kong has political parties and elections, but the election process is guided and constrained by Beijing. You might call it partial democracy. But if the conflict between China and the US intensifies, Hong Kong may really find itself exposed in the political rain, forced to seek shelter where it can – which will surely be as part of China. But this does not necessarily mean that the identity of Hong Kong will be entirely submerged in the greater Chinese universe. Hong Kong’s political activists still believe that their democratic spirit will prevail and may even come to infuse China.

There is a third possibility: that Hong Kong is a model for where both East and West are heading. It’s a fallacy that people are completely free to choose their political order. If we assume that material, and above all technological conditions circumscribe political options, we may want to conclude that the political systems of China and the West are bound to converge, given that they are on the same trajectory of technological development. What we might see then is a West that is less fully democratic than it is now and a China that is a little more so. In both parts of the world will there be thriving quasi-democracies as well as thriving capitalist markets. At that point, the whole world will have become one great Hong Kong. There are plenty of reasons for being unhappy with such a potential outcome.

It’s, in any case, from my friend Joshua Wong that I hope for some insightful thoughts on these worries.